‘America’s Finest City’, San Diego is famous for its year long perfect sunny weather, pristine beaches and naval bases. Located near the Mexican border and along the Pacific Ocean coast, this city has six long beaches perfect for a variety of activities including water-sports such as kayaking, surfing and sailing. When I think of San Diego, my mind fills with the color blue from the famous Bio-luminescence effect which turns the ocean tides blue at night. This is caused by micro-organisms found in the Southern Californian Sea, which keeps the water red during the day and glows blue at night. Many people talk about how swimming in this water is a magical experience, and I had always wanted to see this one day.

I visited San Diego as the fourth and final destination of my ten day road trip in the USA covering the states of Arizona, Nevada and California. We arrived in San Diego from Los Angeles taking the California Amtrak, which was an exciting journey with great views throughout. During our visit we explored the San Diego coves, beaches, kayaking and had a relaxing time with good food and the San Diego vibes. Though I did not see the Bio-luminescence effect, my memory of San Diego remains very blue from the blue water, skies and reflective skyscrapers I saw throughout my stay. 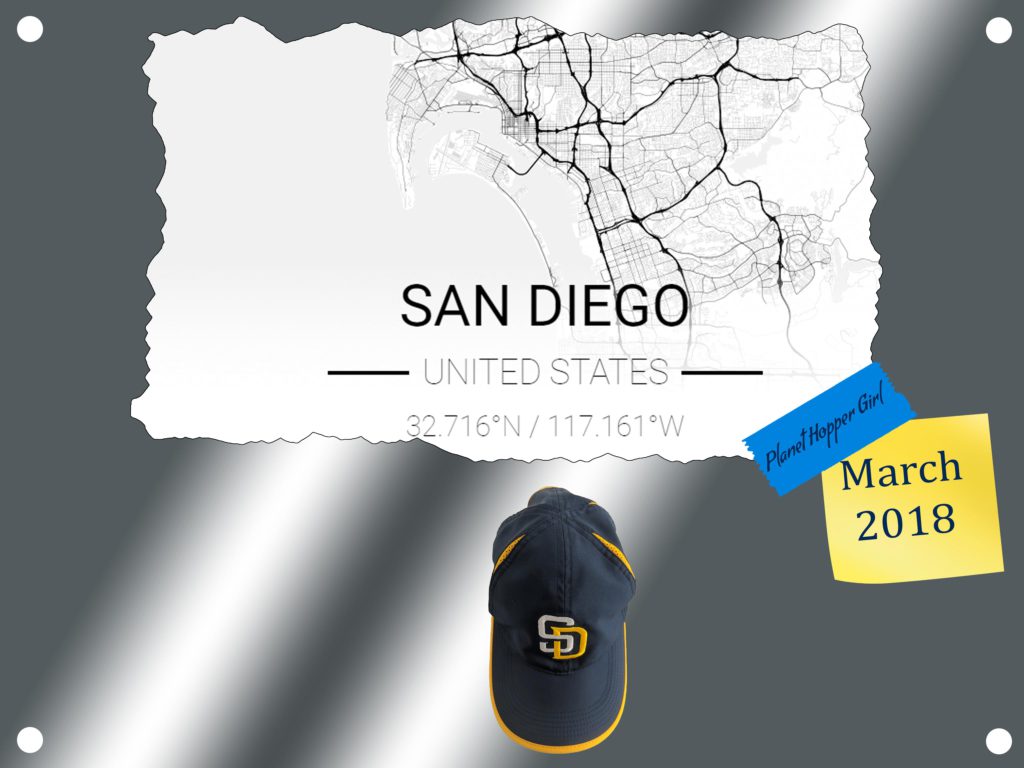 My friend Andriani and I arrived at San Diego train station around noon. The journey was very refreshing and relaxing, as this was the first day in the past week that I was not driving.  My first impression of San Diego was thrilling with sights of blue buildings and the familiar palm trees decorating the streets, a typical sight in California. We directly headed to pick up our rental car and check in to the Airbnb. 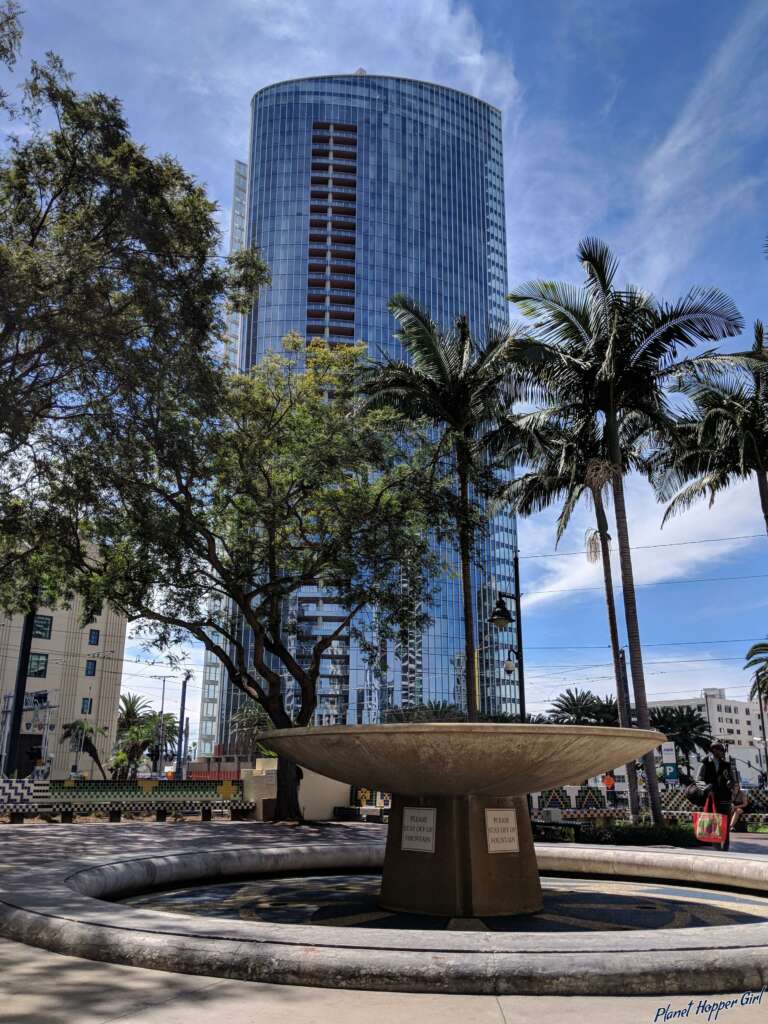 We visited La Jolla Cove on the first day after we freshened up and grabbed some lunch. La Jolla is a posh neighborhood with a very long beach famous for breathtaking sunset views. It was so relaxing for us to walk around the beach enjoying the weather, especially after my long and hectic week of being on the road. 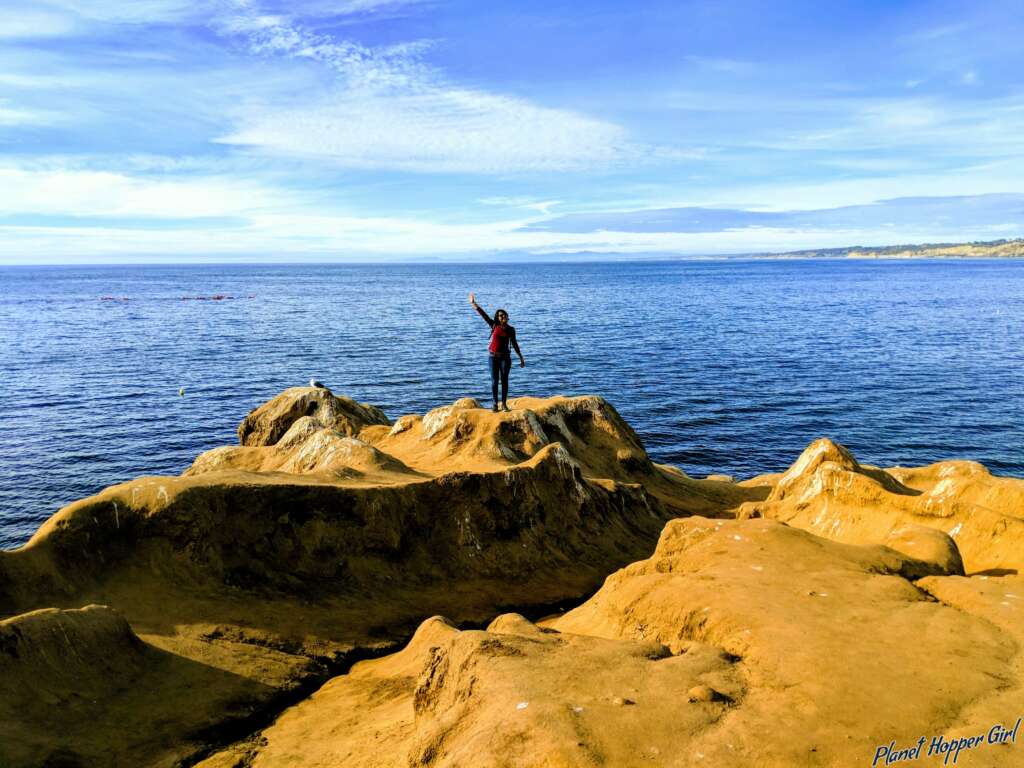 The beach features majestic sea lions along with sea birds. I saw sea lions for the first time here, and they looked as relaxed as if they had just finished a feast and were sleeping it off on the rocks. Their roar sound is special and echoes in the beach.

We spent the entire evening here waiting for the sunset, watching folks enjoying kayaking and surfing as well as the sea lions. 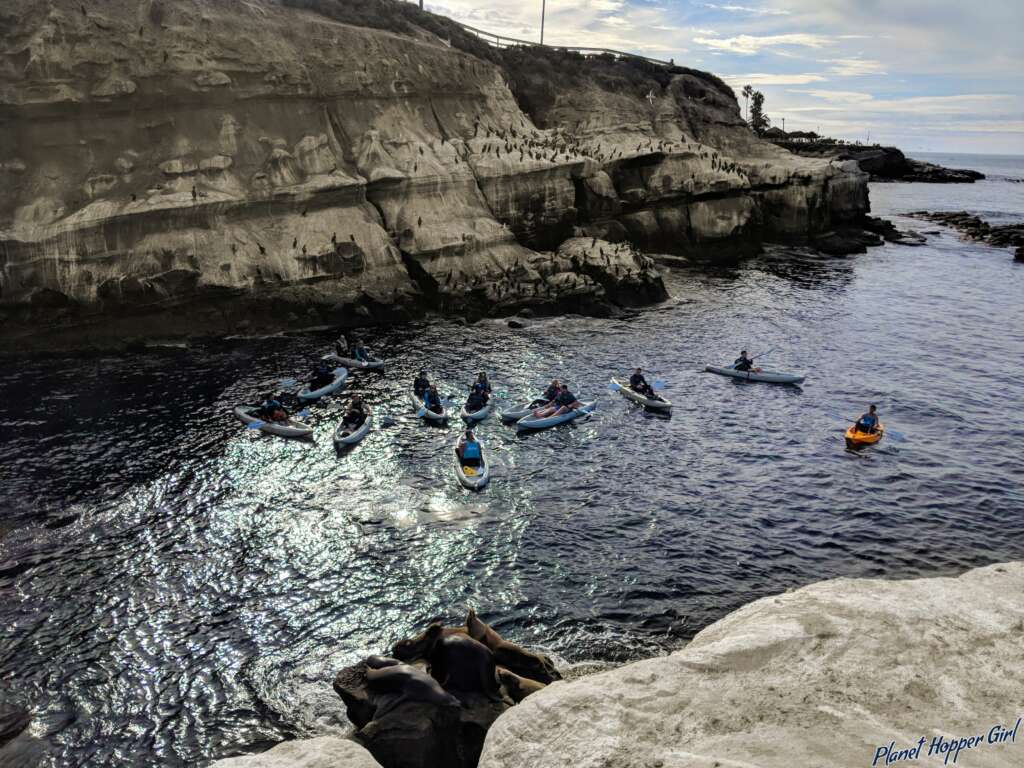 Typically, while we were eagerly waiting for the sunset, clouds came from nowhere and filled the sky. This did not meet my expectations, but still was a nice treat for the eyes. A sunset is still a sunset(:wink:) 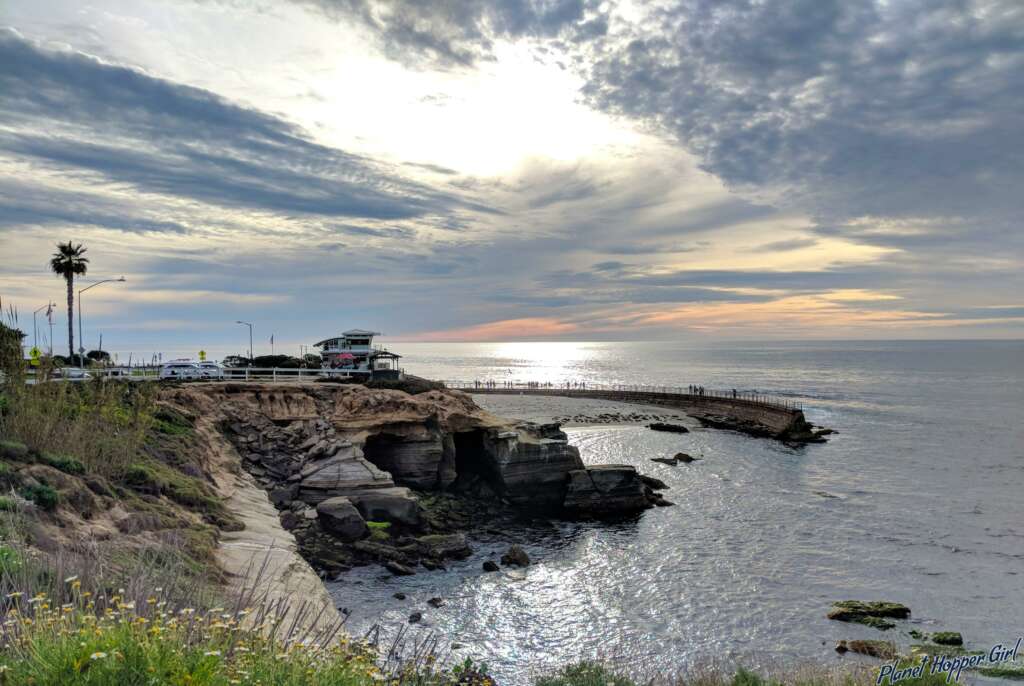 After watching the sunset, we left to meet my friends Surabhi and Aneesh for dinner. They were both my classmates during my under-graduate degree in India. I don’t recall the name of the restaurant but I do remember sharing their famous Mango Margarita on Surabhi’s recommendation.

Catch-up with Aneesh and Surabhi in San Diego, California, USA

We started the day by heading to the University of California, San Diego, where my friend Divya studied. I met her during an internship in 2013 and we had not seen each other for 5 years. Divya joined us for this day and we started off by treating ourselves to a giant American Breakfast with pancakes, fruit, omelettes and french toast. 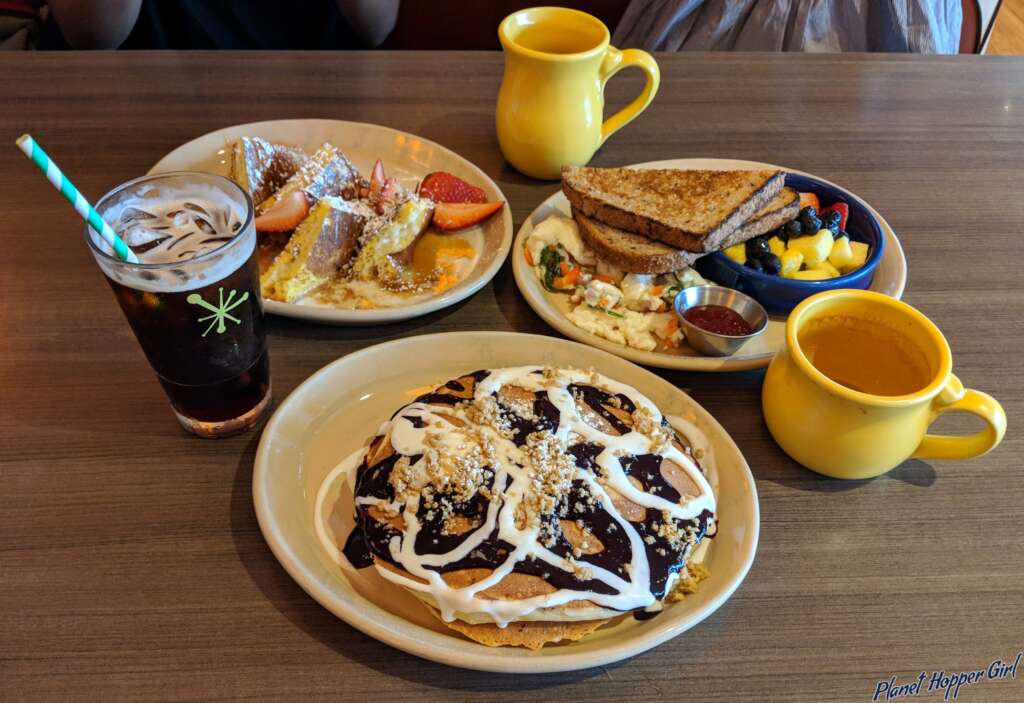 We first went to the Windansea beach near La Jolla and had a short walk along the shore, which was very quiet and calm. 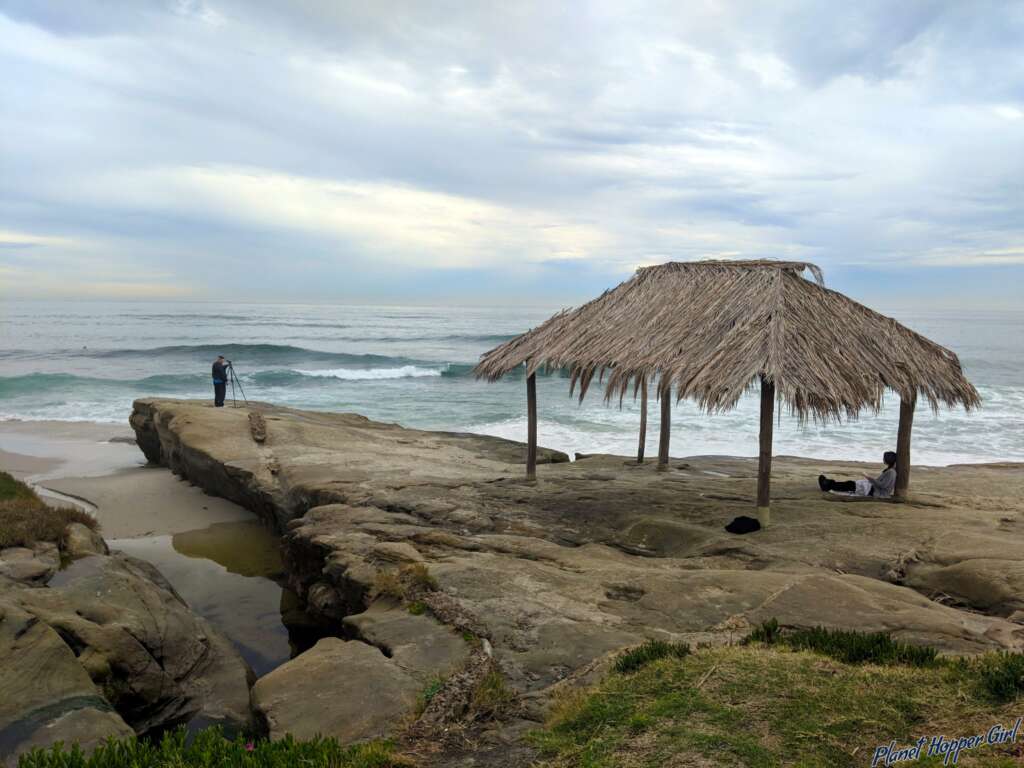 We then headed to the Point Loma peninsula which has a park that features a lighthouse. We first saw the lighthouse and I found it interesting to see the mock up of the old facilities arranged for sea travelers. The southern tip of Point Loma has the Cabrillo National monument, which is a spectacular viewpoint of the sea and also for the San Diego naval base. 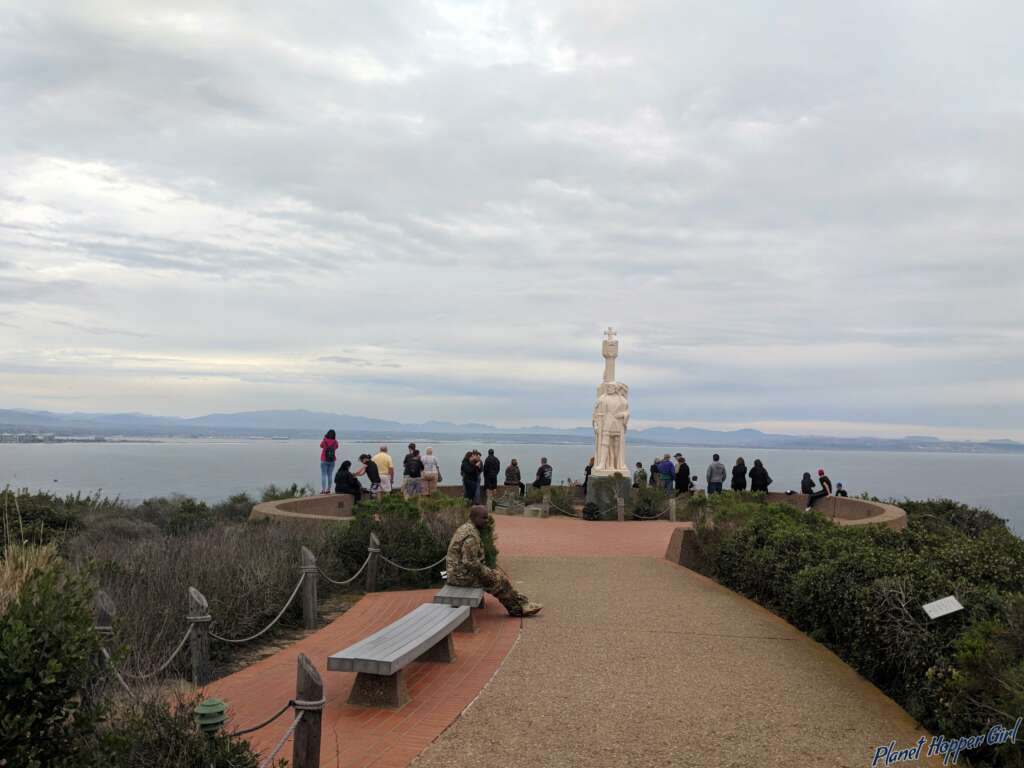 Old Point Loma offers a cliff top view of the sea and the heavy naval traffic. There is a big USA flag flying here and the brisk sea wind provided a very invigorating stroll. 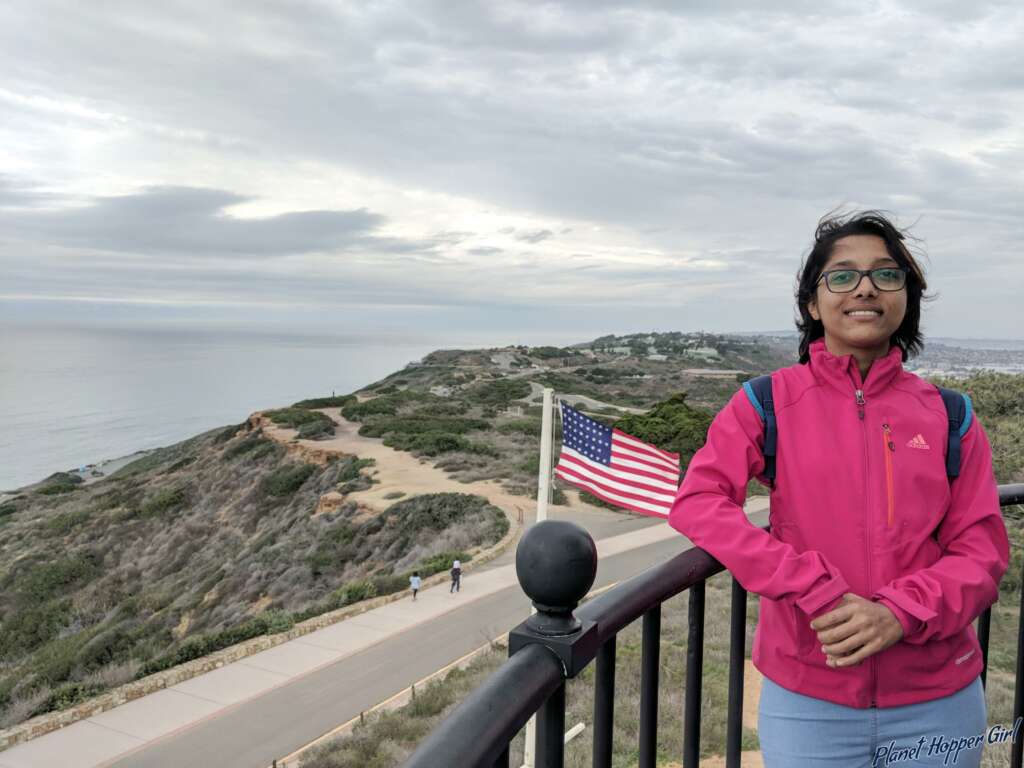 While we were watching the sea and naval activities, we spotted a submarine approaching in the distance. This was an exciting experience as I had never seen a submarine before. We stayed very long time watching it very closely.

After spending some more time here chit-chatting and taking pictures, we reached another cove in the Point Loma park. 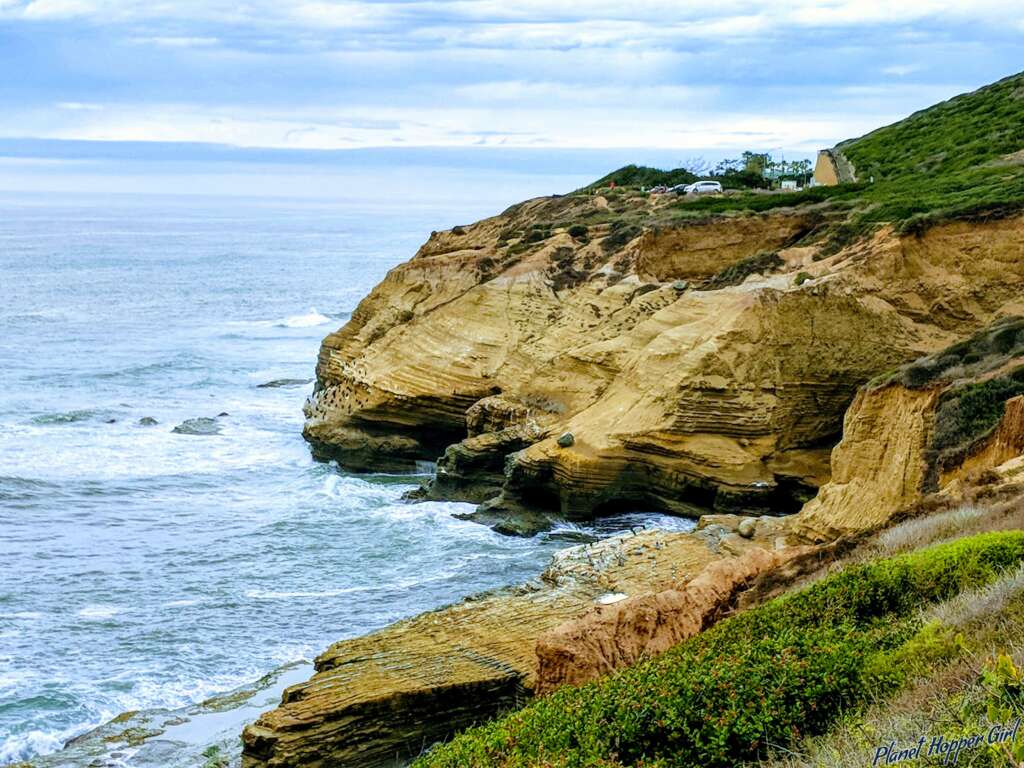 We drove to the Old Town San Diego to spend our late afternoon there. Old town is a fantastic area for great Mexican food, music and cute shops. It is worth to pay a visit to see the charming specialty shops and enjoy the outdoor vibe at its cafes and restaurants. 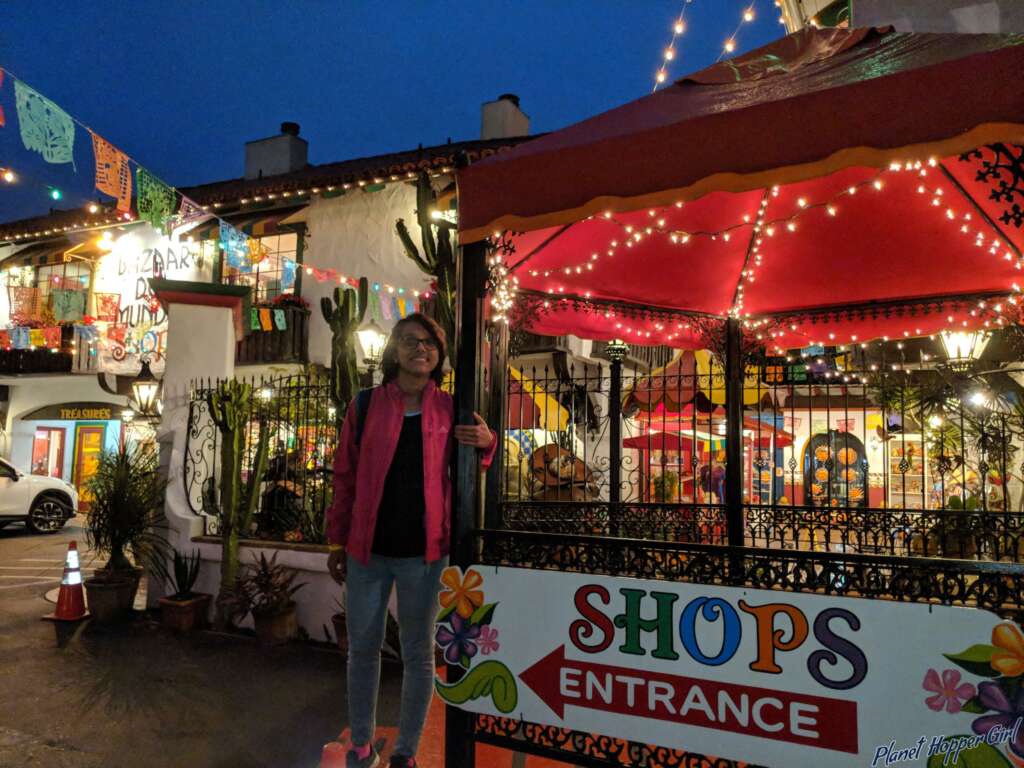 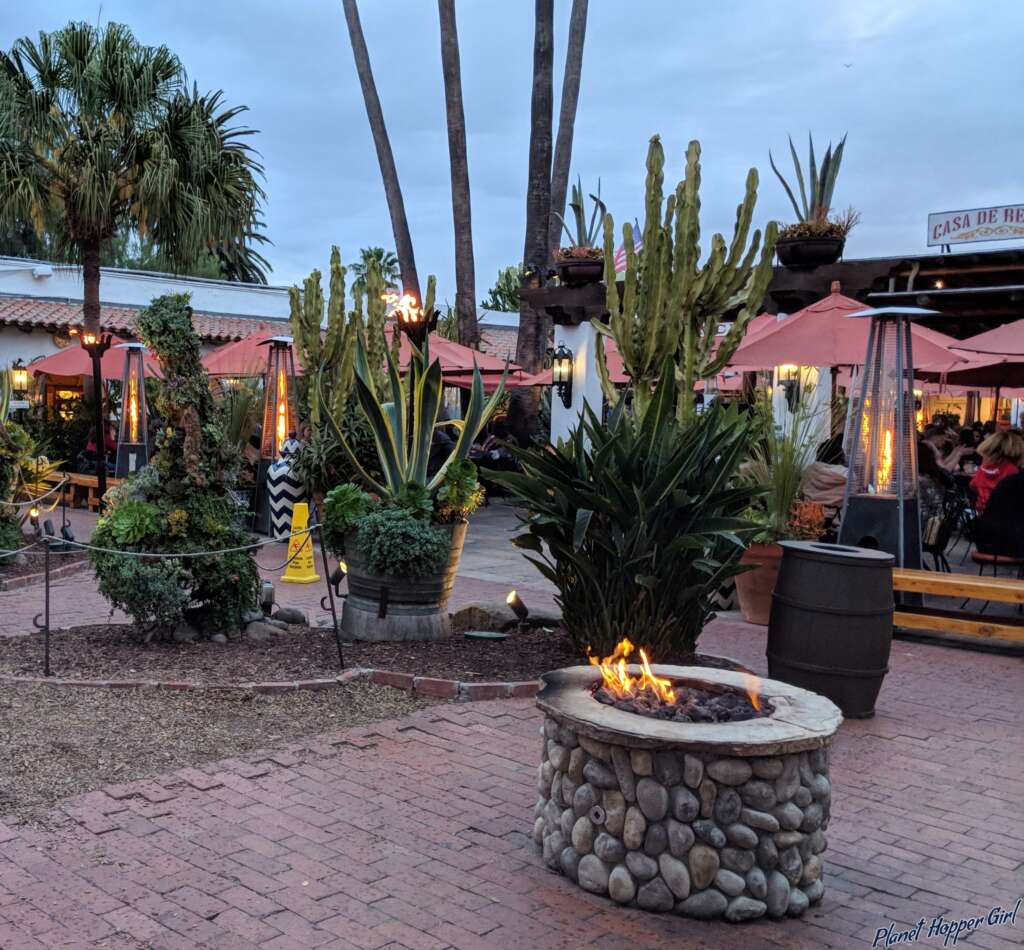 After we finished eating here, we wandered around looking at the cute shops before leaving to spend the night in the city.

We spent the night on Fifth Avenue which has some really cool places for a night hang out. The famous Tiny Roof pub hosts ‘A Live Music Joint’ with some really cool live music performances that reminded me a bit of English pubs. I really enjoyed my time here and was envious of my friends who live in this city. 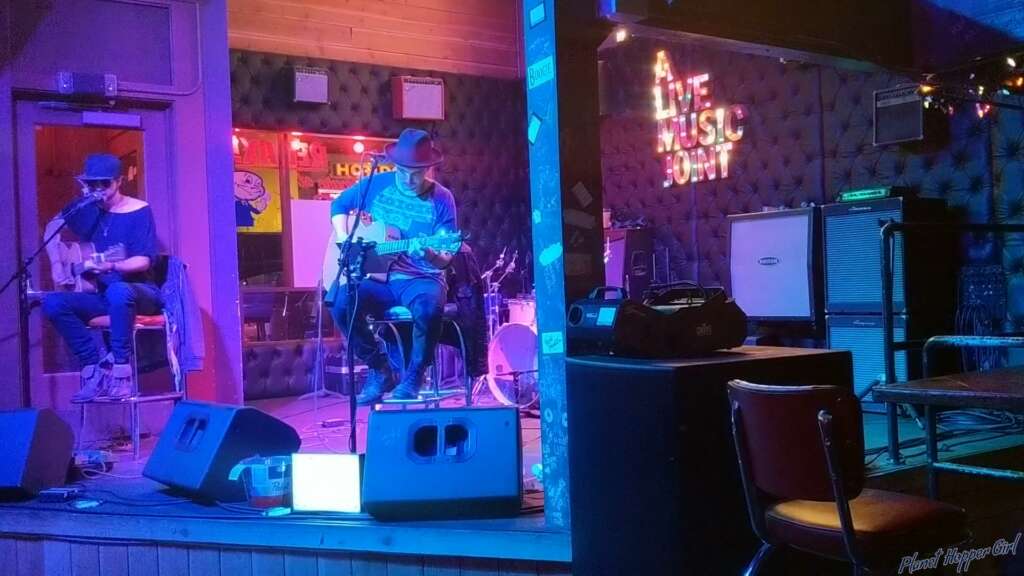 Around midnight we called it a day as Andriani and I had to checkout of the Airbnb early the next day as it was our last day and we had a booking for Kayaking at Coronado.

Coronado is a pretty amazing location which is a must visit in San Diego, filled with many specialty shops, water sports activities and restaurants. It has a backdrop of a spectacular view of the sea, the harbor and the skyscrapers of San Diego. Coronado island and San Diego city is connected by a bridge that is 200 feet high allowing for even large aircraft carriers to pass underneath. 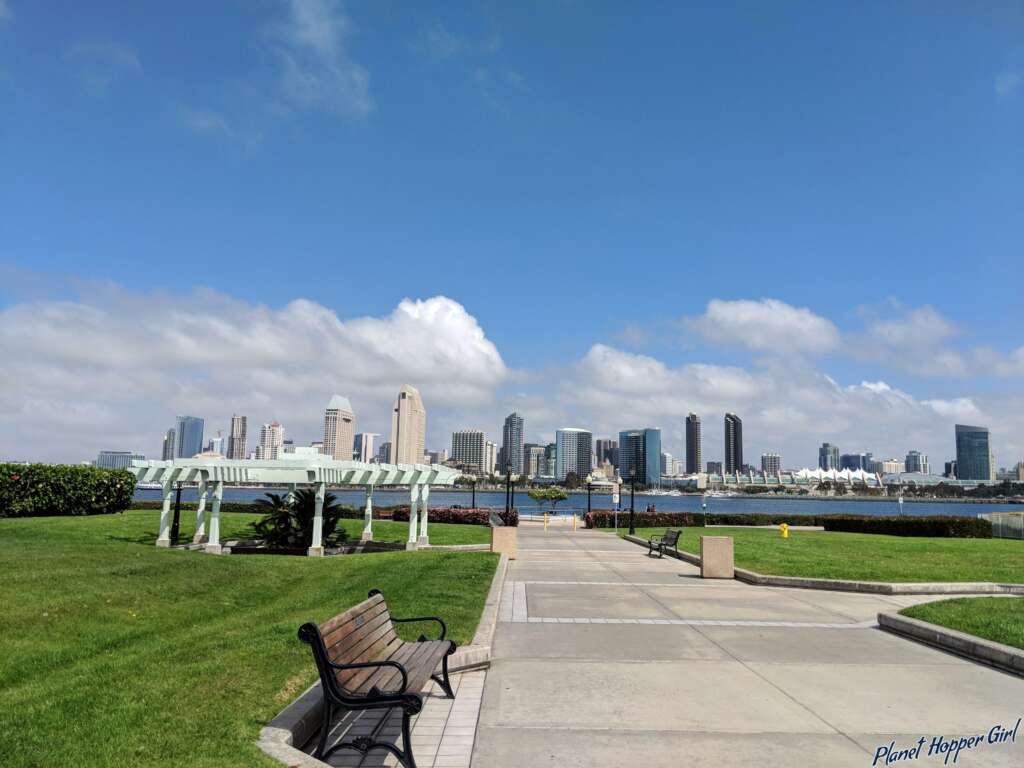 While we were walking around, we met with a group of girls who were singing and dancing. I approached them and requested to dance with them, much to the embarrassment of Andriani, and they were kind to agree. I at least thought those girls were really cool and definitely enjoyed the experience of joining them to dance.

We went to the tourist company we booked Kayaking with. It was our first time and we were assigned a guide to instruct us. We started with our full energy chanting “Left”,  “Right” to helps us row the kayak in the right order, while listening to the guide explain the history of Coronado and San Diego. Things got real when we were in the middle of the sea. There was fierce waves demanding a heavy workout to come back. Our guide was a young guy who had traveled a lot in South America and shared his travel stories with us throughout our venture, which was very entertaining. 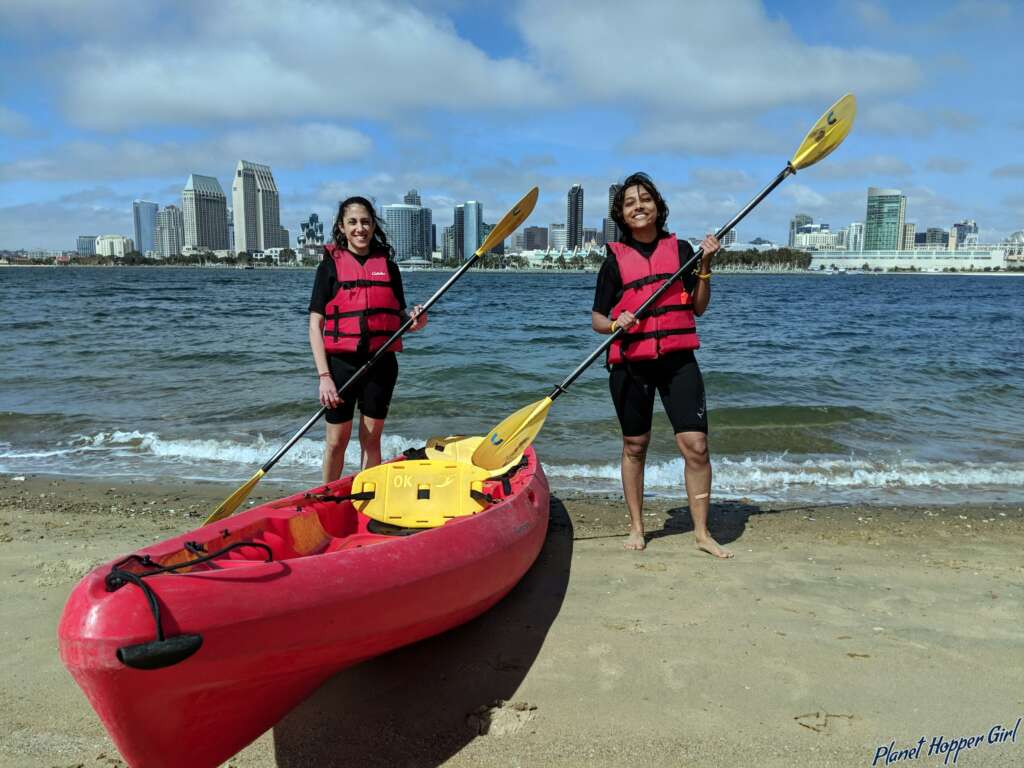 Once we made it back, we spend the rest of our time in Coronado visiting shops and having a delicious Greek lunch. Andriani, who has a Greek origin, did not approve the Moussaka we ate, but I thought it was good 😉

What happened to the weed?

While we were chilling and we had just a few hours before we flew back to the UK, Andriani remembered that we were still carrying the weed we bought in Los Angeles (Blog story here). As we couldn’t fly with it, the obvious answer was to throw it in the bin. However, as we know weed is very precious for some people, it felt wasteful to throw it away (says someone who is constantly scolded for wasting food as I can never finish my meal), we came up with this brilliant idea of gifting it to our kayaking guide.

We went back to the shop and asked to speak with our guide who was away but was called upon our request. When he came, we proceeded to have the most awkward conversation ever. We asked him if he smoked to which he hesitantly responded yes and naturally asked why. We told him we had some weed but we couldn’t fly with it and wanted to give it to someone.  He blushed and agreed to take it but first I demanded that he show me his ID so that I could verify his age. He went back to shop to find his ID, while Andriani tried to contain her laughter. At this point, we also had other shop keepers from the nearby shops getting curious about our conversation watching us. When he returned, I verified his ID and handed over the goods. He was also laughing and stated it was one of the most awkward encounters he ever had too. Oh well, we hope he had a good time with it 😉

Leaving San Diego and the USA

It was time for us to leave San Diego and while driving to the airport, we captured the massive blue bridge that connects the city with Coronado. 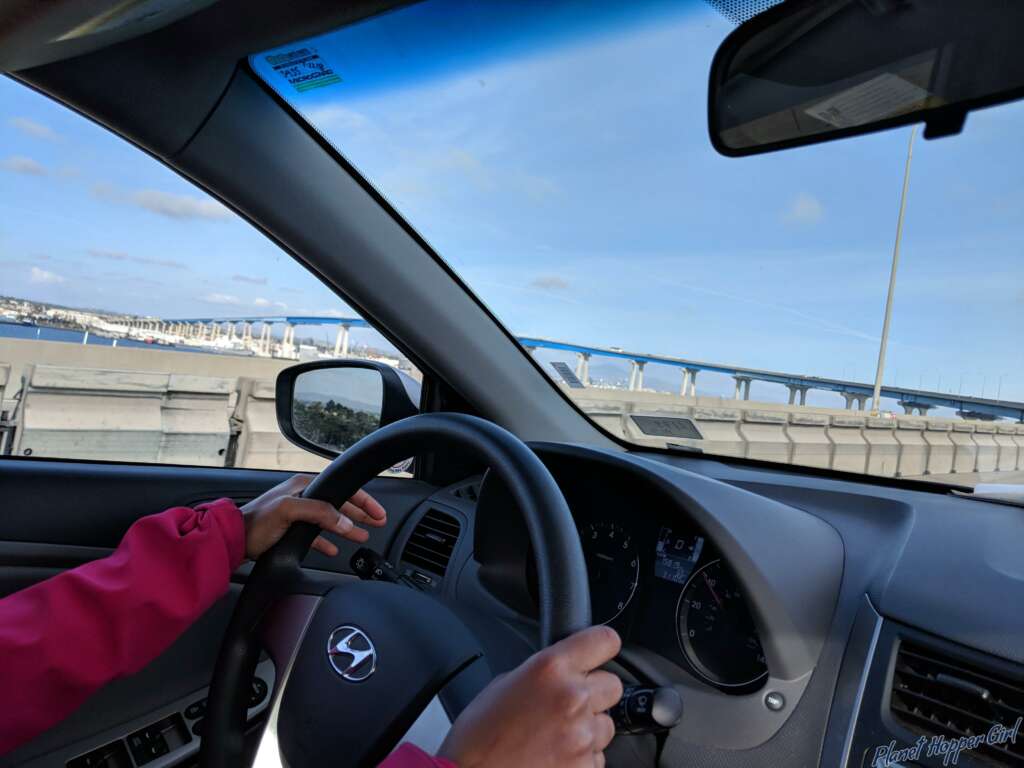 The San Diego vibe was so good and it was the perfect end to my ten day long road trip. With the fine weather, amazing food and ultimate beach experience, San Diego definitely qualifies to be “America’s Finest City”.

San Diego was the last destination of this amazing ten days on road in USA. If you have missed them, checkout the earlier parts of the journey below. For other road trips including another ten-day USA East Coast by Road, keep in touch!

Hi, I am Jumana- a techie living in the United Kingdom, originally from India. While chasing a life that gives me freedom to just be myself, life made me a traveler, which started with challenging me to leave my home when I was 15. I have been exploring both as an expat as well as a tourist throughout my professional life. My favorite travel style is “On the Road” and I have perfected the art of road trip planning, covering multiple famous and undiscovered routes around Europe, UK and USA. Join me in my quest to hop the planet!

Thanks Callum! You will love it there.
Yeh weed donation felt so good😅

I loved La Jolla and Coronado!
And the seals!

Wow! Looks like you had a fantastic time. We really fancy visiting San Diego and this info is really useful. Thanks!

It was really relaxing in San Diego. I definitely recommend. I am glad to hear this is useful to plan your trip. ope you visit there soon.

I love the sea lions in La Jolla! Stinky but fun. And it looks like you went to Snooze Eatery for breakfast! Great spot! I lived in SD for 6 years and love this city.

Oh vowww, you are lucky to have lived in San Diego. It is a place I would love to stay in. Thanks for helping with the name of the bakery.

10 Stunning Castles to Visit in Scotland

10 Scenic Towns to Visit and Explore in...

20 Wildlife To Spot in Scotland and Where...

2 Week Road Trip in Scotland and Nearby...

Three Days in Tromso in Winter