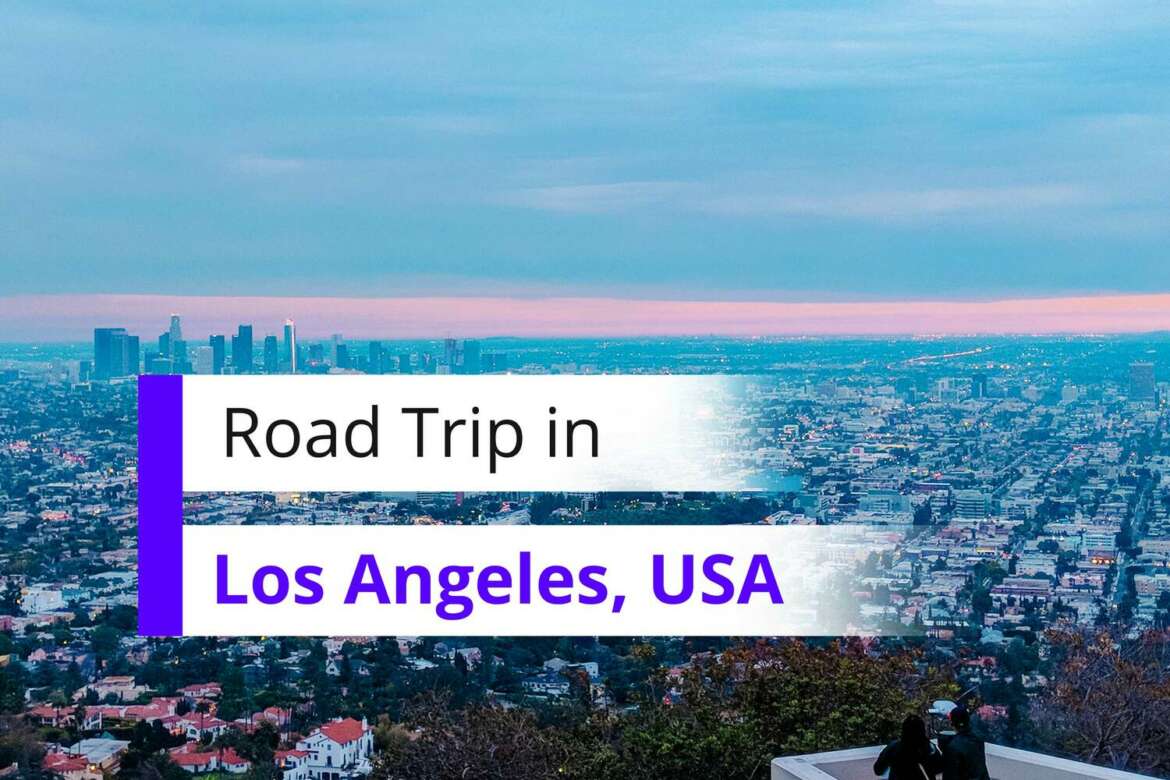 City of Stars, are you shining just for me?- La La Land’s songs not only touched many hearts but also won its music composer Justin Hurwitz 2 Oscar awards for Best Original Score and Best Original Song. La La Land refers to a dreamy state and is also a nickname for Los Angeles, popularly shortened as LA, which goes well with LA LA Land. Hollywood is the heart of LA and many dreams of visiting for the chance of seeing their favourite celebrities. For me, it was more about the La La Land movie and the theme of dreamers that moved my heart to visit, and of course, the sunny Californian weather. Los Angeles is a city that offers so much for tourists to do. From shopping at the famous Rodeo Drive, to taking in an LA Lakers game, there are many options available for people who visit this great city. In this article, I will take you through some of the top 7 things you need to do on your vacation in Los Angeles!

This epic Los Angeles road trip itinerary which is the third instalment of a USA South West road trip from Arizona to California via Nevada. During our visit, we explored the LA life visiting some beaches, Hollywood staples and had my ultimate La La Land experience gazing at the Californian sky at night from Mount Hollywood.

We drove ~300 miles non-stop from Las Vegas to LA on Highway I-15S which I think was the most difficult drive during the trip to California, especially when getting closer to LA. There was very heavy traffic and restless drivers switching lanes often without warning, which felt like a video game where you only get one life. If you don’t feel like driving yourself, you can find some cheap bus tickets from Las Vegas to Los Angeles on Wanderu and let someone else do the driving.

While I was in LA, the traffic reminded me of the opening song of La La Land, Another day of sun, showcasing bored drivers dancing in a LA traffic jam. It was very obvious why Los Angeles is one of the best places to visit in USA judging from the first look and vibe.

7 Unique Things to do during a Los Angeles Vacation

Los Angeles has so much that you could do, so don’t forget to include some of these top ten things on your itinerary during your Los Angeles vacation. Some of the unique attractions in LA include:

So ready for some adventure in Los Angeles? Here are some ideas for your first time Los Angeles road trip itinerary, based on our first road trip here:

If you’re looking for some adventure, head on over to Venice Beach! You can’t really say you have been to LA without visiting this historic beach town. Venice Beach is an artistic hub and a mecca for all things summer. To get there, take the 10 freeway going South. It’s about a 20 minute drive from downtown LA. Park near the pier and walk up the boardwalk to the street.

Venice is a neighbourhood with residential and commercial areas next to a beautiful beach and gains its name probably from the residential complexes being connected by canals resembling the Italian Venice.

The Venice beach vibe is too good with folks and families all around enjoying activities such as cycling, running, skateboarding, BIRD-ing and you will also come across surfers, artists, performers, etc. I envied a few folks who were reading books in hammocks tied around the palm trees.

The public Art Walls of Venice are definitely worth a visit during your California vacations, they showcase stunning street art, not just on the walls themselves but also on nearby trees. We met and spoke with some artists busy painting while we were there and found some had travelled from around the world to paint on these walls. Graffiti artists are one of my favourite people on the planet, just like musicians, they can put out a lot of their thoughts so loudly via their paintings. Respect!

The Venice Beach Boardwalk is a one-mile street market that runs parallel to the beach and has lots of many funky shops and street performances by free-spirited people. While you enjoy all the weird and wonderful creative activities, you can also try a wide variety of food here. We were aware that in California marijuana is legal so when we saw the underground based marijuana shops, we decided to go try that too. If you are feeling adventurous, you need your passport to get hold of one.

Head on over to Santa Monica Pier for an iconic LA experience. The pier is a great place to take in the beauty of Southern California, and get some fresh ocean air! You can sit at one of the many restaurants, snack bar or ice cream shop that line the boardwalk. There are also carnival games and other amusements such as “The Revenge from Mars” arcade game you can play (even if you’re not into video games)!

Santa Monica Pier is very charming with lots of fun activities and parks making it a great place for a family day out. We strolled around for around two hours enjoying some live music, street shopping and even watching some scuba divers in the blue sea.

To reach Santa Mo in LA, take the 101 or 110 freeway going West. The pier will be on your left as you reach Pacific Coast Highway, just before Lawry’s Restaurant.

We headed towards Hollywood Boulevard to see the Hollywood Walk of Fame first – one f the main destinations during a trip to Los Angeles This street has brass stars of all the famous celebrities engraved on them. We followed the star lane and managed to spot one name which we all recognized as the star of the American guitarist, Jimi Hendrix.

Next, it was time to head towards the famous Beverly Hills which is a popular hunting ground for celebrity spotting as many famous celebrities live nearby. We have all watched many of those videos of celebrities shopping around here, so we wanted to make sure we saw this place. Of course, we had no intentions of scrutinizing people’s faces or quizzing anyone if they had seen any celebrities around 😉

While we were strolling around, we were approached by many tourism agents who were offering to take us for a ride and offering their vacation packages to show us some celebrity houses. We were not going to pay the price for the guide but got intrigued and decided to take the Google approach to hunt celebrity homes. We read an article about a boy in Sunset Boulevard who sold maps containing the location of all the celebrity homes in the area and we became determined to obtain one for ourselves. We set off focused on hunting the celebrity map boy and almost forgot about hunting for the celebrity houses themselves. Throughout our searching we didn’t manage to spot anyone on the streets and found the majority of houses had huge gates that blocked any views, so after almost an hour we conceded defeat and decided to go check out the Hollywood sign instead since we at least knew where that was.

We were pretty convinced that Hollywood board wouldn’t be anything pretty but for the sake of ritual we needed to check it off our list of California road trip ideas, as couldn’t say we’d been to LA but not seen the famous board itself. We drove as far as we could up the hill and discovered that to get to the sign itself required a long hike but after our unsuccessful celebrity hunting we didn’t have the energy left for this and decided the view from the Griffith Observatory in Mount Hollywood would be good enough for us.

I captured a LA traffic from the top of the Hill when it again reminded me of the La La Land song, Another Day of Sun, and the lyrics.

“Climb these hills,
I’m reaching for the heights,
And chasing all the lights that shine,
And when they let you down,
You’ll get up off the ground,
‘Cause morning rolls around,
And it’s another day of the sun”

It was sooo…… relieving to get a picture with the Hollywood board from the Griffith Observatory before the sunsets.

Griffith Observatory is a public astronomy site also located on Mount Hollywood and gives one of the best views of the LA basin. The observatory makes a perfect location for either a romantic or geeky day out, or both, with a variety of attractions including a planetarium, geeky shops, cafes, and a public telescope to gaze at the Californian sky. It is a heaven for science lovers and when I saw Neil DeGrasse Tyson’s books in the stores, I just wanted to sit there and read them all maybe another time!

One of the main attractions here was the Pieces of Sky exhibition,  which displays actual meteorite pieces that had been excavated across the US. I found it so exciting to see these pieces that had originated far out in the solar system and fell to Earth many years ago.

Overall the Griffith Observatory was my favorite landmark in LA, and it gave me the ultimate La La Land experience. The sunset and city views from here were so magical and dreamy. I walked around many times and was constantly reminded of the La La Land movie poster.

Pin This Trip for Future Reference

Thanks Junaid. Glad you enjoyed it 🙂

Wow, seems like it was a lovely trip! Can’t wait to finally visit LA myself one day 😎

It was fun indeed, You will enjoy when you go!

I loved reading about your Los Angeles road trip experience. Your descriptions really made it come alive for me. Happy travels! 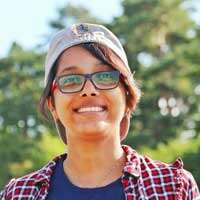